Timegate Instruments in collaboration with VTT Bioprocess Engineering Espoo are working on a pilot study where we endeavor to monitor the bioprocess of ovalbumin production. The pilot is based on previously published study about producting ovalbumin biotechnologically using the filamentous fungus.

– We have now launched this successful cooperation with Timegate Instruments. Together we are developing state-of-the-art, advanced process monitoring beyond typical fermentation process measurements, to achieve high quality data and deeper understanding of the bioprocess. With Timegate´s technology, we are able to monitor the process in real-time, online and to gain more insights in microbial physiology and health of the production host, explains Senior Scientist Kiira Vuoristo from VTT. 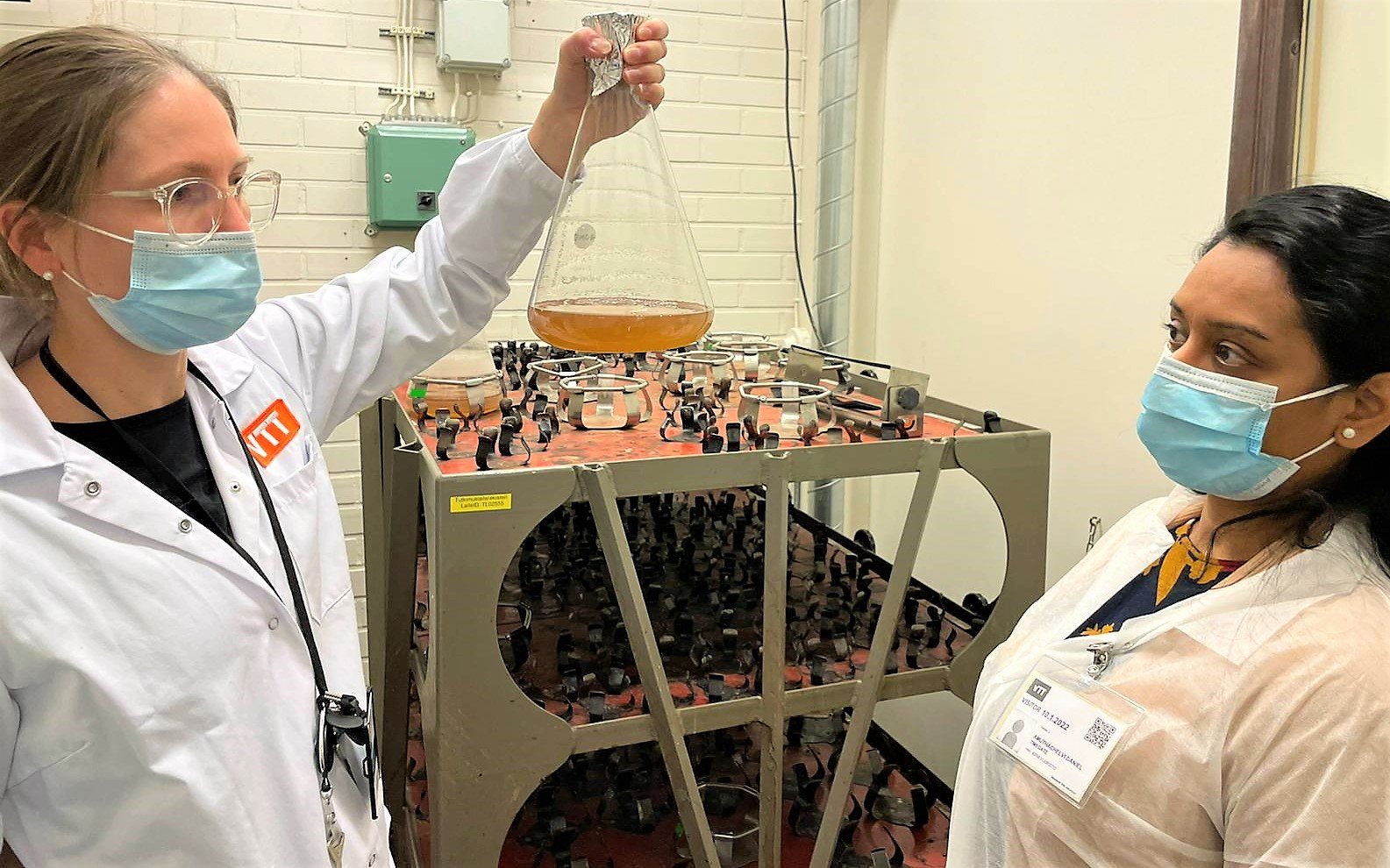 Egg white is one of the most important sources of protein used by the food industry. Global consumption of egg white powder rose to 1.6 million tonnes in 2020 and the market is expected to grow further in the future.

The growing demand is raising concerns about both sustainability and ethics, such as rearing chickens solely for egg production and the production generating large levels of greenhouse gas emissions, contributing to water scarcity and causing a biodiversity loss.

More than half of the protein content of egg white powder is ovalbumin, which VTT has successfully produced with the help of the filamentous fungus. The gene carrying the blueprints for ovalbumin is inserted into the fungus using modern biotechnological tools. The fungus then produces ovalbumin, which is separated from the cells, concentrated and dried to the final product. 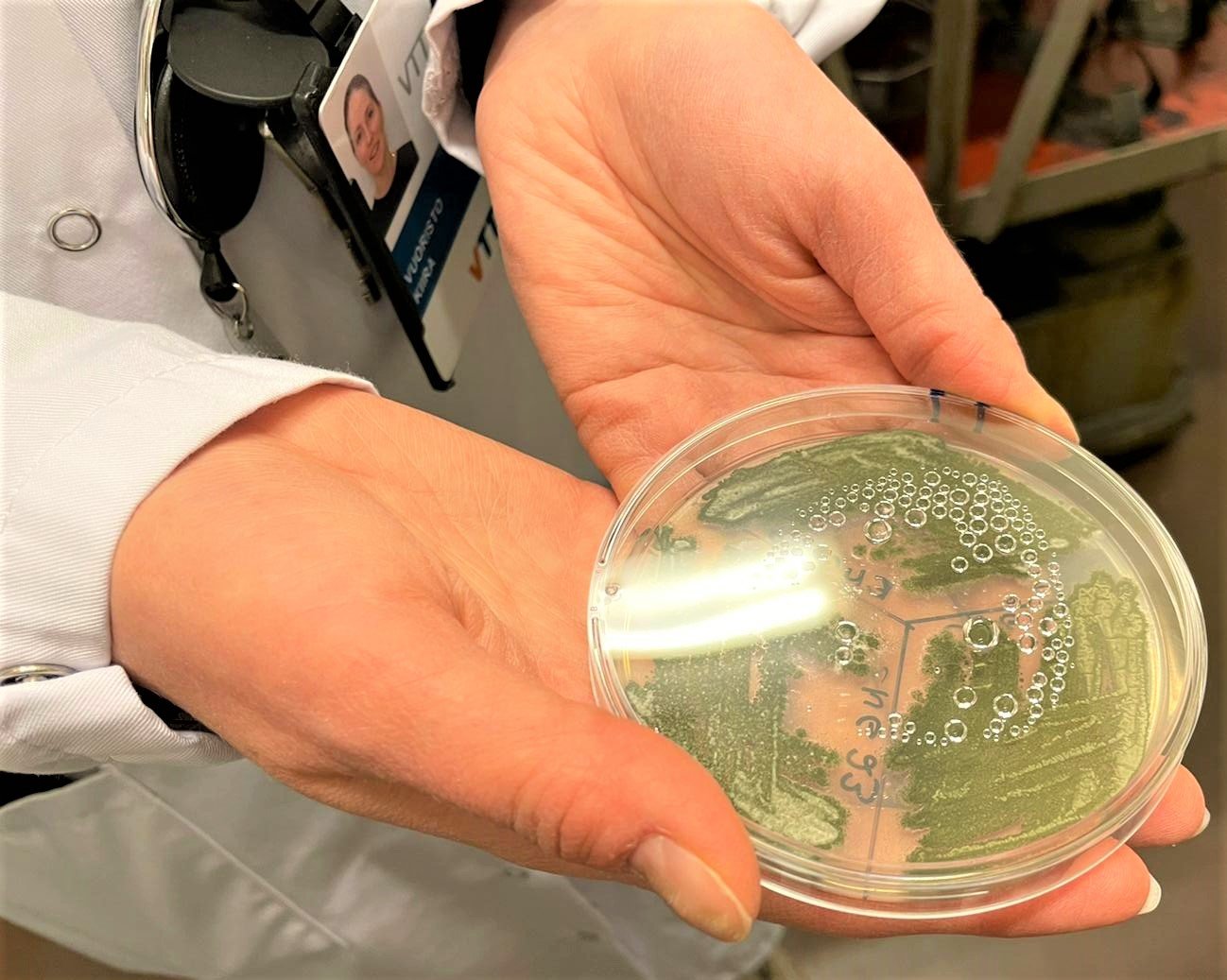 The first step in protein production: fungal mycelium on a petri dish.

The biotechnical production of the most important egg white protein, ovalbumin, mitigates the environmental impacts of chicken-egg-derived ovalbumin such as greenhouse gas emissions by half and need for land use by almost 90 percent, according VTT's article. Increased environmental impacts are especially true when using low-carbon energy production.

Cell-cultured products generally need more electricity than typical agricultural products, and therefore the type of energy source used affects the level of environmental impact. On the other hand, microbes generally require significantly less glucose and other nutrients per kilogram of protein produced than animal-derived production. Even though the environmental impacts have not been explored industrial-scale production, cell cultured ovalbumin could become a sustainable replacement for chicken egg white powder.

The cellular production of ovalbumin has reduced environmental impact compared to livestock agriculture, and yet there are ways to save even more raw material. To increase the yield and aim for better results, a continuous monitoring of the process will further reduce the environmental stress.

Aspergillus oryzae, a fungal strain, which is genetically engineered to produce ovalbumin, was cultured in a five-liter bioreactor for this pilot study. In the current set-up for this bioreactor, the availability of advanced online monitoring devices beyond the typical online fermentation parameters such as pH, temperature and dissolved oxygen is still limited.

In view of this, Timegate’s PicoRaman Spectrometer was installed in the bioreactor, and a continuous monitoring of the bioprocess is in progress. This monitoring will aid in the continuous observing of the nutritional status of the media which will aid in healthy culture and a better yield of target compounds. Further with the same measurements, we aim to monitor biomass concentration and substrate consumption in the process.

Bioprocess monitoring week will be completed with the results later on. Stay tuned! 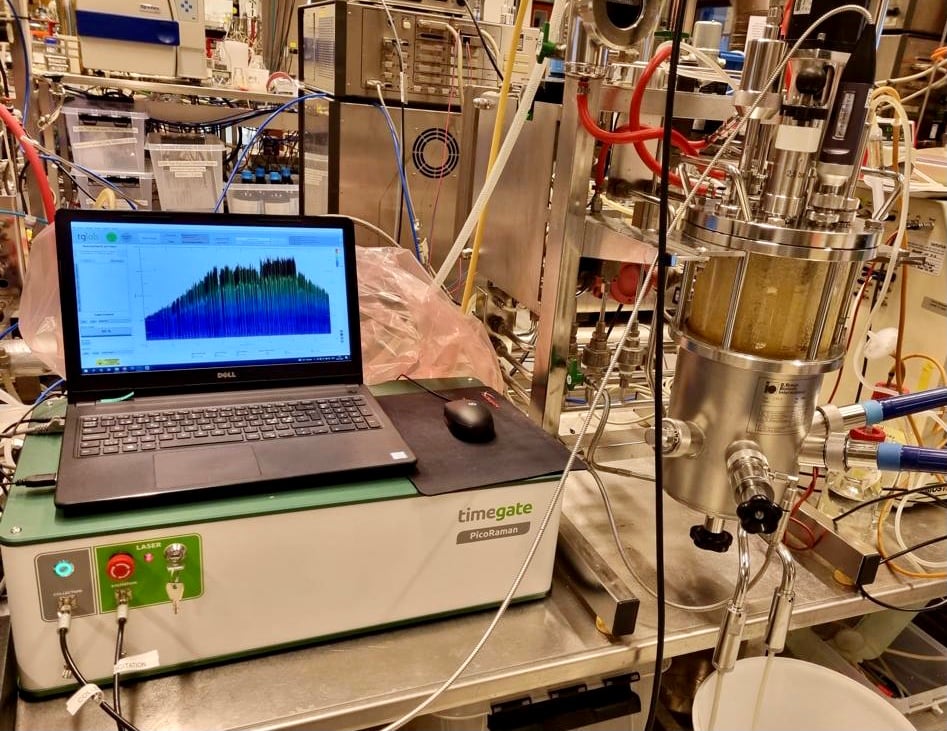 Timegated PicoRaman Spectrometer is attached to one of the bioreactors.