A research group from VTT The Technical Research Centre of Finland and Drug Research Program, Division of Pharmaceutical Biosciences, Faculty of Pharmacy in Helsinki University got their article published in Nature Resesarch Journal, published on 12th February 2020. The first generation time-gated Raman spectrometer was used in the research to set the benchmark for auto-fluorescence suppression. The results compared to conventional Raman instrument were very promising. 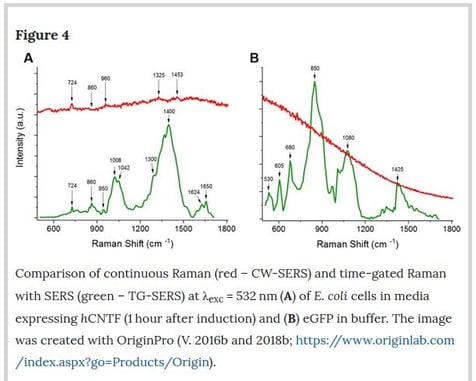 You can access the article in here (link) and below is the abstract of the article.

Time-Gated Surface-Enhanced Raman spectroscopy (TG-SERS) was utilized to assess recombinant protein production in Escherichia coli. TG-SERS suppressed the fluorescence signal from the biomolecules in the bacteria and the culture media. Characteristic protein signatures at different time points of the cell cultivation were observed and compared to conventional continuous wave (CW)-Raman with SERS. TG-SERS can distinguish discrete features of proteins such as the secondary structures and is therefore indicative of folding or unfolding of the protein. A novel method utilizing nanofibrillar cellulose as a stabilizing agent for nanoparticles and bacterial cells was used for the first time in order to boost the Raman signal, while simultaneously suppressing background signals. We evaluated the expression of hCNTF, hHspA1, and hHsp27 in complex media using the batch fermentation mode. HCNTF was also cultivated using EnBase in a fed-batch like mode. HspA1 expressed poorly due to aggregation problems within the cell, while hCNTF expressed in batch mode was correctly folded and protein instabilities were identified in the EnBase cultivation. Time-gated Raman spectroscopy showed to be a powerful tool to evaluate protein production and correct folding within living E. coli cells during the cultivation.